Starting a podcast is a pretty simple. Staying committed, inspired and consistent in publishing your podcast is a whole other matter.

In our Podcasting Luminary Series, we share the voices of podcasters that have been podcasting for 5 or more years and have them impart some of their best podcasting wisdom grounded in experience.

Today we feature Beats and Eats

Nick has been podcasting for 6 years.  His most current project is Beats and Eats.

Beats and Eats is about Movies, music, tv, comedy, food, sports, you name it. Nick’s co-host, Ty Ray loves it all and loves to talk about it.

Ty and Nick’s partnership was born of their unwavering loyalty to the Boston Celtics (notice the basketball in their logo) and has grown into a collective passion for all things pop culture.

They currently remain “name brands” in the Boston sports broadcast arena with their appearances on the CLNS Celtics Post Game Show.

Ray, spent 20 years as a tv sports anchor/reporter covering many of the biggest sporting events in the world, while Nick’s experience is as a sports podcaster, restaurant owner and consultant to some of the finest dining establishments in the United States. They have been told that “together, Ty and Nick make for quite a tasty discussion cocktail.”

ALL OF THE ABOVE!

Honestly, I started podcasting and blogging as a hobby after leaving the restaurant business. After so many years of being so busy, I found myself lost without the stress and the feeling of “being needed.”

A good friend suggested that I start a hobby and treat it like a job. I’ve done that every day since.

So, it started as a fun hobby to occupy my time. As the listener demand for episodes continued to grow, I realized that I may be getting “famous” to a very small group of people. I found myself liking being an “authority” and having an audience for my consultation; sports at the time.

Profits have come, gone and come back again. I know my ultimate goal is to continue to refine my hobby into a profitable business. 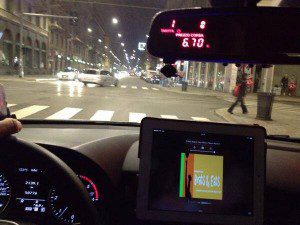 Over the years there have been many. I guess I will focus on one from my sports broadcasting and one form my pop-culture Beats and Eats broadcasting.

Sports: At the end of every NBA season, I am swamped with mailbag entries. What always gets me is that our most engaged audience is from overseas.

A few seasons back, I had a lengthy mailbag entry from a fan from South America. He thanked me for being his main outlet for sports news. Obviously, he does not get the games where he is located.

He went into detail about the various personalities and callers into our show. He really paid attention. That one email honestly kept me podcasting for many months when I felt there were few people inspired by our work.

POP CULTURE Beats and Eats: Plain and simple, I recently received a tweet from a cab driver in Milan, Italy. The tweet was simply a photo (attached) of our show on his iPad, being played in his cab. Gave me the chills. It’s crazy that Italy is our number 2 country for downloads behind the USA.

Any notable names of listeners you have heard from over the years?

Lydia Cornell from the hit 1980’s show Too Close for Comfort is a regular listener and sends many mailbag messages to us. As does Matthew Fahey of MTV’s hit show, Awkward. We also get a lot of feedback from the Hell’s Kitchen Chefs.

I still cannot believe it. It’s humbling and inspiring.

The real “notable names” do not have names though; they are the downloads from all over the world. I am still shocked every time I look at my Libsyn stats.

Absolutely! I find Twitter and Facebook best for audience interaction and branding. Google+ has been a new social media I’ve gotten obsessed with. Though I do not interact much there, I’ve found it amazing for Google search engine placement and exposure, branding.

Do download numbers matter matter to you? or is audience engagement key?

Very much so. I think it’s kind of silly to think that it doesn’t matter to everyone. I guess their are people who podcast with no real interest in who is listening. For me, however, if I am not getting downloaded, I might as well talk to myself… oh wait… I do that anyway. LOL.

The amount of opportunities and friendships have been unbelievable. I started as a small amateur sports blogger/podcaster. Today, my company is a credentialed member of the Boston press corp.

I have attended (and podcasted about) such prestigious events as the NBA Finals and the Bill Russell Statue Dedication. My sports podcasting has opened the door to networking opportunities with big names in the entertainment industry, which has helped Ty and I get great, big name guests for our pop-culture podcast, Beats and Eats.

What advise would you give a new podcaster so that they keep going!

Be patient. Be consistent. Be professional. I feel that is the true formula for success. I always say, if used responsibly, the internet is a great means for anyone to achieve their goals.