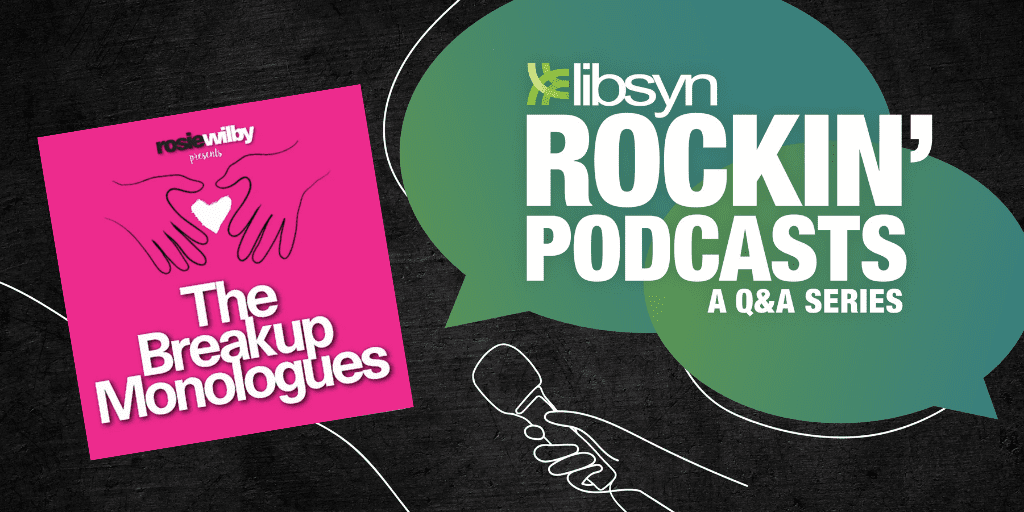 This series is all about libsyn’s podcasters. Its sole purpose is to introduce these awesome podcasts to the world as well as share their podcasting insight to empower the community!

Q & A with Rosie from The Breakup Monologues

I started podcasting in 2018. I had been touring a trilogy of comedy shows investigating the psychology of love and relationships. The final part of this was all about breakups. So that inspired a live chat show called The Breakup Monologues with me interviewing fellow comedians and writers about heartbreak and recovery.

The conversations I was having during the live chat show were so fun and interesting that it seemed a shame not to record them and make them available. I had presented radio shows on London’s artsy and anarchic station Resonance FM for many years. So podcasting seemed like a good idea. I’ve always enjoyed interviewing people and the intimacy of the audio format.

The Breakup Monologues has expanded from being a simple sharing of funny, terrible, bizarre or dramatic breakup stories to a broader exploration of the psychology of love and heartbreak. Alongside comedians and writers, guests have included evolutionary anthropologists, psychologists, bioethicists and more to investigate the parallels between drug withdrawal and heartbreak or to discuss the spooky future of ‘anti-love drugs’ that might help us to forget an ex.

The majority of our episodes have been recorded live at venues such as London’s podcasting hub Kings Place, so we haven’t needed a big tech setup ourselves. The venue techs would always mic up the live guests and the audience, usually with Shure mics.

I have an editor Dave Pickering, also a brilliant and creative podcaster in his own right, who receives the audio files from the venue, gives them a bit of TLC and uploads them to Libsyn. It’s very much recorded ‘as live’ without much taken out.

I enjoy the spontaneity of treating it like a completely live show. We record short seasons and then have a break. However, the lockdown due to the pandemic enforced a longer than usual break. All the live events I’d booked in were cancelled. So we are now recording a new season remotely over Zoom, with a new magazine format with links and interviews that harks back to the structure of the radio shows I used to do on ResonanceFM.

I have a background in journalism and PR, as a former music critic and music publicist. So I was fairly clued up about getting traditional print coverage. I wrote a press release and secured some nice reviews in the U.K. magazines and newspapers.

I was already using Twitter and Facebook to promote my comedy shows and started including posts about the podcast there. I was not yet using Instagram. But it seemed to make sense because we often took funny ‘before’ and ‘after’ backstage photos at the live recordings. So I decided to set up a feed specifically for the podcast, sharing those images and extra content and ideas.

The Breakup Monologues is now also going to be a book and has been nominated for a British Podcast Award. So those things all help.

The importance of being adaptable. I wish I’d responded to the lockdown sooner and started recording remotely quicker. But it took me a while to get a vision for the show that wasn’t a live stage show.

I’m just so grooved into that rhythm of performing in front of an audience. And suddenly we couldn’t do that any more. It knocked me a bit for six. But I’m now really enjoying the new format. And we are going to do some completely live online recordings too.

Rosie Wilby wanted to share breakup stories that we could all commiserate with, the good, the bad and the ugly.  What it turned into was so much more in depth than she ever expected.  To listen to this funny, relatable and oddly scientific journey listen to Rosie in The Break Up Monologues on Apple Podcasts or follow her on IG or Twitter.

Rosie Wilby stumbled into The Breakup Monologues after doing comedy shows about love and relationships. Breaking up seemed like the final step in the cycle but what she discovered was an actual science to love and relationships which she turned into a podcast.  You can do it too.  We will help you start your very own podcast…check out our Start Your Podcast blog series, and if you are ready, we have the best podcast hosting plans around!