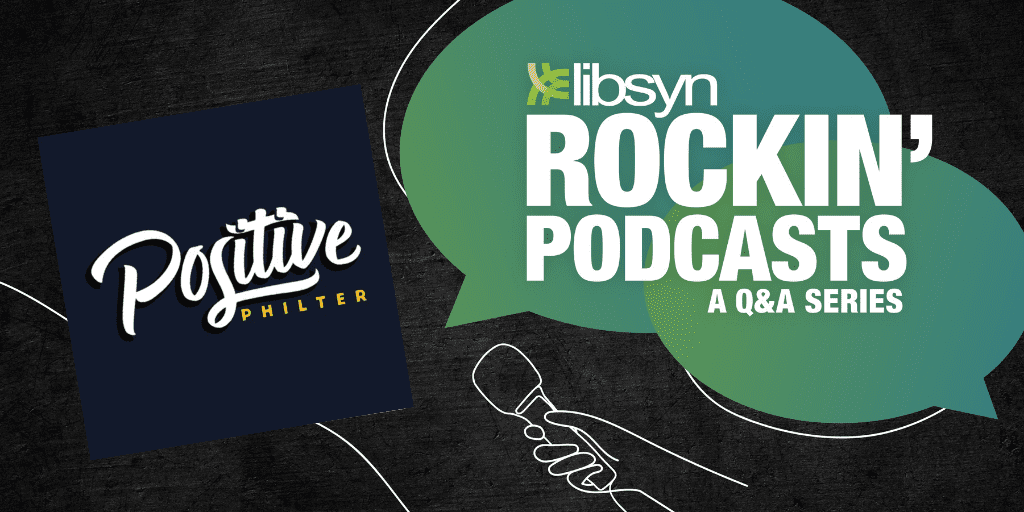 This series is all about libsyn’s podcasters. Its sole purpose is to introduce these awesome podcasts to the world as well as share their podcasting insight to empower the community!

Q & A with Positive Philter

I started podcasting in April 2017. I didn’t even know what a podcast was before 2016 but once I realized it was like having your own radio show, I wanted to have my own.

I was making YouTube videos in my car called “Random Ramblings of Philip Wilkerson” and realized it was pretty boring to just sit in my car and talk. I wanted to have a platform to share positivity and motivational content but was not interested in doing so via video. My friend Samnang Man put me in touch with a podcaster by the name of Dean Bokhari who had his own show called the “Meaningful Show Podcast”. After one conversation with Dean, I knew podcasting was the platform I wanted to explore. He actually told me to use Libsyn.

My show is called “Positive Philter”. It’s about looking for lessons and positivity in all situations, whether that is your career, parenthood, traveling, etc. I like to have various guests share their experiences and expertise in a variety of topics. For me, it’s a place to learn from all my guests and give voices to those who I support and admire.

In-person I use the Zoom H6 to record.  Virtually- I have been using Zoom.

I edit all my podcasts on Audacity because it is free and simple to use.

I have a Blue Microphone and a few Behringer Mics as well. I record onto my MacBook.

I usually send people this Amazon Wishlist of items I already have or want when they ask me about setting up.

I mainly promote my podcast via social media (LinkedIn, Facebook, Twitter, and Instagram). I also sell stickers and merch (shirts, hats, etc.). My main promotion is the various organizations I am a part of (Alpha Phi Alpha, Toastmasters, Higher Education Associations, etc.) I also belong to a bunch of podcast Facebook groups and GroupMe(s). These groups are a great way to collaborate with other podcasters as well as learn new things.

I tell everyone to set up a recording schedule and a release schedule. During my first year, I just recorded and released episodes sporadically. That didn’t yield a following and my audience didn’t really grow. Once I started releasing episodes weekly, I started to see a change in my downloads. I believe it is because the audience got used to a listening schedule and expected new content on a schedule. I would encourage all new podcasters to map out their first 10 episodes and create a system that works for them from the start.

We all have more than one area of interest, what Philip has found in that the power of positive thinking helps you all the way around. Listen to Philip on his podcast Positive Philter on Apple Podcasts or Spotify link provided.

Philip was inspired to try podcasting after trying the YouTube Vlogging style to get his positive message out. A friend recommended he try podcasting and Philip has never looked back. What is your inspiration? Say it in a podcast.  We’ll make it easy for you, check out our Start Your Podcast blog series! If you are ready, we have the best podcast hosting plans around!