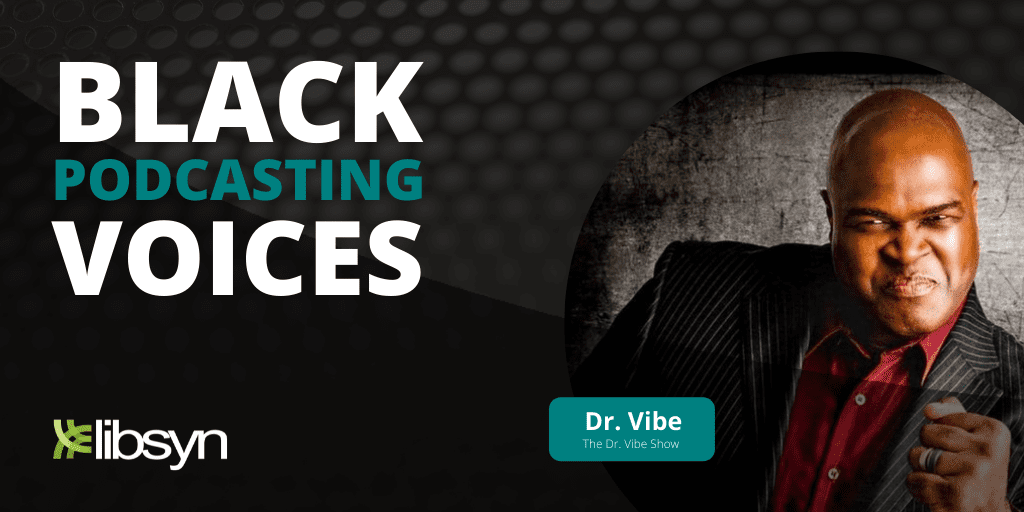 The #BlackPodcastingVoices series casts light on Black voices in podcasting, centering the independent podcasters that are (for the most part) doing all the things.

These posts will focus on Black podcasters’ lived experience in podcasting, insights about the medium and what brings them the most joy. The hope is to educate, and inspire the ‘everyday podcaster’ to keep podcasting through featuring Black excellence and resilience in the medium, now and in the future.

When I engage with Dr. Vibe, I know I will be taken care of. As soon as we started talking, he said to me, “I don’t want to make people’s lives complicated, because you know what? After we finish this conversation, life happens, right? So, anytime I can add light to people’s lives, that’s what I’m here for.”

He has proven that time and time again in the years that I have interacted with him.

Dr. Vibe is multilayered, charismatic, kind and accomplished. He was the first Black person hired to do urban music marketing for a record label in Canada, while at the same time working as an inside sales rep at Adidas, Canada.

His heart and soul are always looking to serve in whatever capacity they can with a fierce commitment to supporting Black men and dads.

Dr. Vibe is enjoying podcasting now more than ever, and that’s saying a lot, because if you check out the two time award-winning Dr. Vibe Show, you’ll see he’s published over 3000 episodes!

What a pleasure it is to speak to this man. I hope you get to know him just a little bit, and go on to subscribe to his show!

What is one of the most overlooked podcasting skills?

How you treat your guest or guests before you go live will either set you up for success, or make it a hard pull.

As much as possible before we go live, I do my best to have a pre-show conversation, whether it’s a week before, or sometimes the three minutes before. That’s so key.

You’re dealing with people and you’re taking time out of their life to make them part of your life. How you treat people before you go live is so important.

I don’t do interviews. I do conversations. Now there is a place for interviews. But in the podcasting realm, we have flexibility. When someone comes on for the first time I’d say, “look, we’re not doing an interview, we’re doing a conversation.” So many times they say “Oh, that’s fantastic, I like that!” Even before they’ve come on live, they’ve bought into you.

And the key thing is listening. I tell people, “I’m only going to ask you questions based on what you share with me; I’m not going to take you out in left field.” Basically, it’s called mirroring and matching, something I learned a long time ago.

You are the only podcaster that is sponsored by Dove Men+Care. How did that come about?

This story incorporates a lot of things that I suggest podcasters do. One of the things I’m really passionate about is helping fathers and men. About two years ago, I became a member of Canada’s national fatherhood organization called Dad Central.

Now, going the extra mile counts. I saw the press release and read it. It premiered at the Toronto International Film Festival and I missed it. But every good press release has a contact name and phone number. I could have said, “Well, I’ll think about it next year.” No, no, no, I called the person from the PR agency. I said, “Hey, my name is so-and-so and I do a lot of work in the dad space. I wish I could have known about this earlier.”

So there’s something I do that my mentor taught me called the three asks. Many times when people are pitching, they just do that one big ask and if the company says no, they got nothing else. So I went in with intent.

My big ask to them was “Hey, can I work with you?”

“Well, do you have any projects that I can do right now?”

“Can I at least get your phone number and contact information? And can I follow up with you in three months?”

Now, I got the phone number.

“Can I send you some of my work online?”

So, two months down the road, I get an email. “Would you like to work with Dove Men+Care on a project?” I said, “Yeah.” They said, “can you meet with with me and my team on Monday?”

Now the thing that’s key for good podcasters, if you’re serious, is research. I went to LinkedIn and got the names of everybody who I was going to be meeting with and their background.

Monday comes, the conversation is happening, and they’re going at me. 45 minutes. questions, questions, questions, questions. I said, “Look, I would love to help you; I’m part of a national organization for fathers. Would you like to set up that meeting?” They said, “Sure.” At the end, they asked me, ”Do you have any questions for us?“ I said ”Yeah, what are the three biggest challenges you have working with Dove Men+Care?“ The phone went dead for 30 seconds. And I heard ”that’s a good question.”

The reason I asked that question is that I want to be a solution to someone’s problem. Because if you can be a solution for their problem, someone’s problem, you have a closer in. I said, “If this collaboration works out, how does it help you?” I asked each one of them “how does it help you individually?” I want to find out what skin they have in the game because they have higher-up bosses that are looking at you and most of the time, you won’t meet them. How can you help that person that’s sitting right across the table from you or right across the screen from you?

The agreement was signed.

What can the podcasting industry do better? 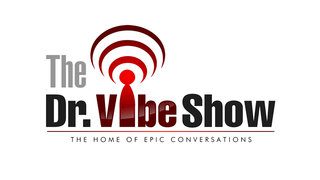 Are there any Black podcaster or voices that inspire you?

A gentleman who influenced me when I was getting started, was Tavis Smiley. He had a show on PBS. He had people just come on and hang out on a couch with him. And I remember he had Harrison Ford on. Harrison Ford don’t like doing interviews. And about 10 minutes in, Harrison Ford said “You know what, I don’t usually like doing these things but I’m really enjoying myself.” So when you have that moment where someone said they had a really good time. It’s magic.

Another person who inspires me is Mario Armstrong. I have been blessed to know him since October 2013. He has provided me support and clarity. He was key in getting the sponsorship opportunity with Dove Men+Care. Mario, his wife and his team have helped and continue to help me grow professionally and personally.

I would like to thank my wife, my family, everyone who has helped me and continues help me (too many people list :), everyone who has listened to my epic conversations even for one second and Roger (publisher and co-founder) and Camille Dundas (editor-in-chief) at ByBlacks.com the #1 Black online magazine in Canada.

The power of podcasting goes way beyond downloads. Dr. Vibe exemplifies the type of leadership that can rise out of the medium to provide support, community, connection and conversation for a very niche audience.

Dr. Vibe very much focuses on the Black Canadian experience and in doing so, resonates way outside that arena.

If you want to connect with Dr. Vibe, here are the deets!

© Copyright 2023 – Liberated Syndication (Libsyn)
Scroll to Top
This website uses cookies to improve your experience. We'll assume you're ok with this, but you can opt-out if you wish.
ACCEPT REJECT Read More
Privacy Policy